During his life, Chuck Berry favored the Gibson ES-355 model. The guitarist also dabbled with Gretsch guitars. He even used a black custom Gibson Les Paul. But it wasn’t until the late 1950s that the ES-335 made its debut as a commercially available semi-hollow body electric guitar.

The guitar has an all-maple laminate body with a period-correct paint job. The guitar is equipped with Grover tuners and a Maestro Vibrola tailpiece. It features a three-piece maple neck with an ebony fingerboard. It also includes a bound tortoiseshell pickguard. It’s topped off with a Tune-O-Matic bridge and an aged gold hardware package. It’s also loaded with two Gibson 86 Custombucker Alnico 5 humbuckers.

The guitar is available in a transparent Wine Red finish. It’s a limited run of just 100 guitars worldwide. Each guitar is handcrafted by Gibson Custom Shop luthiers. It comes with a certificate of authenticity. It’s priced at $6,999.

In honor of Chuck Berry’s 95th birthday, Gibson has announced the release of a limited edition ES-355 guitar. It’s a recreation of the famous ’78 ES-355 guitar that the legendary rock and roll pioneer played. The guitar is made to replicate the historic accuracy of the ’78 ES-355, and it’s been expertly aged by the Gibson Custom Shop’s Murphy Lab.

The all-maple laminate body eliminates feedback and shoulder strain. It also features a smooth, crisp, articulate tone. It’s equipped with Grover tuners and a Conduit bracket/finger holder. It’s crafted to look and play like the original, and it comes with an aged gold hardware package. It’s topped off with ebony fretboard inlays and custom block inlays.

The Gibson Custom Shop Artist Series Chuck Berry 1970s ES-355 is a limited edition reissue of the iconic guitar. It’s handmade by the Gibson Custom Shop luthiers and is based on the original ’78 ES-355. It’s also outfitted with an ebony fingerboard and a custom-carved, split diamond headstock inlay. It’s built to commemorate the legacy of the man who launched the careers of so many famous musicians. It’s an outstanding piece of art. And now you can own it too! 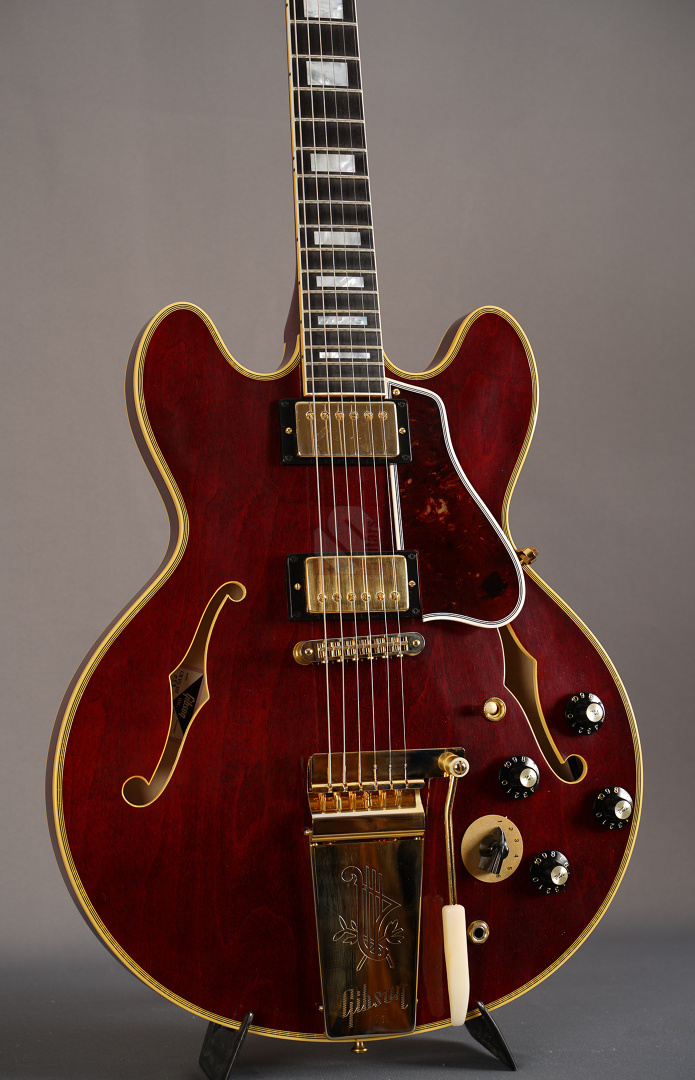 Developed by Gibson’s Custom Shop, the Chuck Berry 1970s ES-355 is an incredibly detailed recreation of Chuck Berry’s famous ’78 ES-355. Featuring red spruce bracing, an ebony fingerboard, aged gold hardware, and a Maestro tremolo, it is a guitar that is sure to be sought after by collectors. The guitar has been expertly aged by the Murphy Lab team.

The Chuck Berry 1970s ES-355 is available in a transparent Wine Red to finish. The ’70s ES-355 is also available in a Sunburst finish. The guitar features multiple-ply binding, a Maestro Vibrola tailpiece, a Tune-O-Matic bridge, Grover tuners, and a bound tortoiseshell pickguard. The instrument also comes with a conduit bracket/finger holder and aged gold hardware.

The ES-355 was manufactured by Gibson from 1958 until 1982. It is a Thinline semi-hollow guitar with a maple body. The ES-355 was one of the most popular models of Gibson’s Thinline series. It has been used by many notable guitarists, including B.B. King, Ritt Blackmore, Eric Clapton, Chuck Brown, and Alex Lifeson.

The Gibson Chuck Berry 1970s ES-355 is handmade by the Gibson Custom Shop luthiers and will be available in a limited production run of just 100. The guitar features single-ply binding, a Maestro tremolo, Grover tuners, and a Varitone circuit. The headstock of the ES-355 has been designed with a 5-piece split diamond inlay.

The pickups of the Gibson Chuck Berry 1970s ES-355 are built with Alnico 5 pickups. The guitar is equipped with two volume pots and a switch wired with an off position. The pickup blend and individual volumes make the ES-355 sound similar to a Les Paul. The neck is also constructed of maple. This makes the guitar extremely resonant.

The Gibson Chuck Berry 1970s ’70s ES-355 is available for sale at $6,999. The guitar is being offered in Wine Red and Sunburst finishes. The guitar was developed by Gibson’s Custom Shop in honor of the music legend. The guitar has aged gold hardware and the legendary spilled-diamond inlay on the headstock. It is a beautiful work of art and the guitar sounds clean. Among the Gibson line, the ES-355 guitar is one of the company’s most revered jazz guitars. This particular model was a major part of Berry’s repertoire. This is a special edition guitar that has been crafted by the hands of the Gibson Custom Shop. This is a Gibson homage to the late, great Chuck Berry.

The Gibson ES-355 has a couple of noteworthy features. It’s got a vintage-style Tune-o-Matic bridge and a classic Maestro Vibrola tailpiece. Besides the usual appointments, the guitar also has a few other notable touches. For example, the guitar comes with an original case and tags.

The Gibson ES-355 is a guitar that is designed to honor Chuck Berry. It has a few of his signatures, including the split-diamond inlay on the headstock. Other highlights include a vintage tuner, maple laminate construction, and an ebony fretboard. It has also been given a little bit of a Murphy Lab makeover. This includes a gold Grover Keystone tuner and some custom aging.

The Gibson ES-355 has its own unique set of features, most notably the Varitone switch. This feature opens up a sonic universe. The guitar has a thick full sound, courtesy of the pickups. The ES-355 also has a spruce bracing scheme, which is a big upgrade from the previous incarnations. The ES-355 is also equipped with a few other gizmos, such as a swivel-head, and a custom tweed-style case.

The Gibson ES-355 is an excellent choice for any guitar player, especially those looking for the best of both worlds. The guitar has a flawless finish and is a beautiful piece of art. The guitar is priced at $3,500 and is expected to be in high demand by collectors and players alike. It’s a worthy investment in the legacy of a music legend.

The Gibson Custom Shop has been a longtime player in the guitar game, and their latest creation is a Gibson homage to the one and only Chuck Berry. The guitar is a recreation of Berry’s ’78 ES-355 and is part of a limited run of only 100 units.

Featuring legendary musician Chuck Berry, Live From Blueberry Hill is a collection of the guitarist’s beloved hometown shows. Recorded between July 2005 and January 2006, it includes performances of his classics “Roll Over Beethoven” and “Johnny B. Goode” among other favorites. It’s also available as a digital download or CD.

Chuck Berry, whose guitar phrasing helped to create rock and roll, was born in St. Louis, Missouri, and lived in Ladue, Missouri, as well as Wentzville, Missouri. He performed more than 200 concerts during his 17-year residency at Blueberry Hill in St. Louis, which became a pilgrimage for luminaries such as John Lennon and The Beatles.

In addition to his music, Chuck Berry influenced several other musicians, including The Beatles and Beach Boys. His songs were clever and relatable. The band he assembled for his hometown shows at Blueberry Hill was known as the Blueberry Hill Band, and included several members of the Berry family. It also featured longtime Berry collaborators, such as pianist Robert Lohr and bassist Jimmy Marsala.

The Blueberry Hill Band was Chuck Berry’s longest-running band in his 60-year career. It reaffirmed the vitality of his signature songs, such as “Johnny B. Goode” and “Roll Over Beethoven.” Among its most important members were the Berry family, which included Charles Berry Jr., a guitarist, and his daughter Ingrid Berry, who played the harmonica.

The Gibson Custom Shop recently released a limited-edition run of Chuck Berry’s Gibson ES-355. The guitar is a replica of the instrument that Berry used during his early years, and it’s been carved to match the profile of the original. It’s equipped with an ebony fingerboard and custom block inlays. It’s priced at $6999. It’s also being produced in wine red, which is a tribute to Berry’s famous cherry red Gibson.

Those who want to purchase the new Gibson ES-355 can order the guitar now. It’s also available in a limited-edition Murphy Lab-aged replica. It’s being released as part of the guitarist’s 95th birthday celebration. The guitar comes with a Captain’s hat.

Chuck Berry and the Blueberry Hill Band performed 209 shows during their 17-year residency at the famed restaurant. The musicians who backed Berry are now celebrating their musical legacy with a new live album, Live From Blueberry Hill, which will be released on December 17.